France is on of the founding Members of the EU and the second economy, located in western European, it has a very high level of human development and a GDP per capita above the European average with a rather urban population.

Most mainland France has a continental weather except those under Mediterranean influence. Almost 30% of its land is covered by forests.

Biomass for heating in France 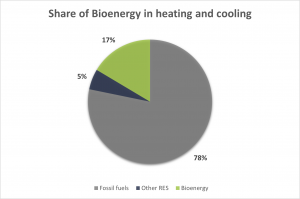 France energy consumption from renewable sources is below 20% and below European Union’s average.[3] France’s energy mix is highly electrified and a nuclear-based aiming to phase out coal in 2022.

As a consequence, heating & cooling sector has a rather low penetration of renewables, while bioenergy is the main source.

France has a carbon tax excise duty, is imposed on carbon, natural gas, and energy products according to their CO2 content. It is paid by households and businesses at the time of the purchase of the product. However, gas boilers are eligible for public subsidies such as Prime Coup de Pouce. Overall, heating appliances are slightly younger than the EU average.

At local level, the atmospheric protection plans define the objectives and the measures. In addition, all communities are obliged to include air quality aspects in the territorial planning document thanks to the planning of climate-air-energy-territorial plans (PCAET) by 2019.

For domestic generators, the "Green Flame" label was created and uses as a reference the classes defined in standard EN 303.5. For generators for professional use, the support devices are very restrictive up to 1 MW in particular for particulate emissions (14). Indeed, a national database has been set up by ADEME and references the commercial brands which have demonstrated their performance.