Sweden is a Northern European country, with high level of urbanization , in 2019 87% of Sweden population lived in urban areas and cities . Sweden has a GDP above EU average and was the 7th EU economy in 2019.

Considering its northerly geographic location (at the latitude of parts of Greenland and Siberia), Sweden enjoys a favourable climate. From the southwest, Atlantic low-pressure winds blow in air warmed by the North Atlantic Current and make the weather mild but changeable. Another type of influence comes from continental high pressures to the east. These create sunny weather, which is hot in summer and cold in very winter. More than half the total land area of the country, 57% or 23 million hectares, is covered in forest. This is as large an area as the whole of the United Kingdom.

Biomass for heating in Sweden 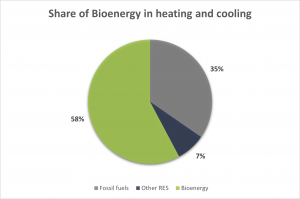 With ambitious targets set in the Energy Agreement and Climate Framework, Sweden aims to become a net-zero carbon economy by 2045.

Sweden has become coal free in 2020. Sweden has a share of renewable energy of 18%.

In the heating & cooling sector, renewable represent 65.4% of the energy consumed. Bioenergy is the main source by far.

Its overall existing heating stock (including all technologies) is more updated than the average, although almost 40% of the installed capacity is dated before 2002.

Sweden has the highest carbon price in the EU and this is driving decarbonization of all sectors at a faster pace than other EU member states.

Sweden presented its National Air Pollution Control Programme with an emission reduction target of 19% for PM2,5  from 2020 to 2029.