Spain is a southwestern European country with a very high level of human development and a GDP per capita below the European average and a urbanised population.

While the Spanish climate is generally warm thanks to the Mediterranean influence, winters can be cold in the noncoastal and northern areas. Forests cover more than 35% of the country surface, with a sustained growth in the last decades.

Biomass for heating in Spain 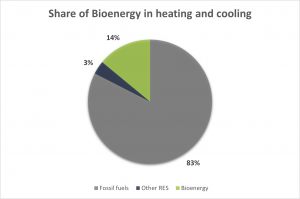 Spain has a renewable sources penetration in its energy mix very close to the EU average, around 20%. Electricity generation is much more decarbonised, closed to 50% of renewable sources than heating & cooling.

This is partially explained by the lower residential need of heat and the low mobilization of forestry biomass. On the contrary, cogeneration and the use of agricultural residues is more common than in other EU countries.

Spain bioenergy industry has remained stable for the last years, mainly because the lack of specific government incentives and the removal of feed-in tariffs for all renewables.

Spain domestic heating stock is general old and in particular the renewable-based stock. Gas and electric heating cope almost half each of the domestic share with heating oil and renewables very limited in the domestic environment.